To Kill A Mockingbird. A New Play By Aaron Sorkin. 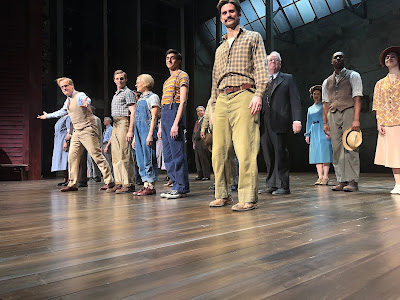 Why do people romanticize the old days? Calm down – we still have milkshakes and racism.

But if you must – let Aaron Sorkin handle it. He rewrote To Kill a Mockingbird, and it just opened on Broadway. It was even better than I imagined.

He really rewrote it. so much so that Harper Lee’s estate sued him. Both parties settled, giving the estate a percentage of the profits. (It was a total money grab. Bottom line: Aaron Sorkin is the best writer ever – so much better than even Harper Lee.)

Six-year-old Scout is played by a 40-year-old actress. No explanation needed – you immediately get it, as she, her brother and their friend Dill become on-stage narrators. It’s unlike anything you’ve read in the book or seen in the movie. (And had to be done because real kids can’t handle this intricate dialogue.) It’s part of what makes the story all the more fascinating, with Sorkin finding the hilarious moments in this tragedy, and Jeff Daniels owning the stage.

I remember seeing The Social Network in a theater with fellow actors. At one point, I turned to them and saw them literally on the edge of their seats, leaning forward so as not to miss a word of Aaron Sorkin’s script. Last night was no different. It’s a two-hour and 35-minute play you wish went even longer. And hell yeah, I shouldn’t have snapped the above photo in the theater, but I did. Front row seats, for my hero.
Posted by Matt Shevin at 12:08 AM