In Which I Catch An Error Thanks To My True Love: Baked Goods. 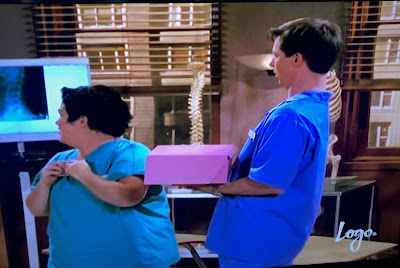 No, I have never eaten an entire box of doughnuts. I just ate all the doughnuts inside it.

That was my first thought as I watched an old episode of “Will and Grace” last night. My second: they committed a mistake. You see, the show takes place in New York, but Jack is holding a pink bakery box. Pink bakery boxes are an LA thing.

I learned this a couple years ago from an LA Times article. Here are the highlights:


Southern California is the undisputed epicenter of the doughnut world — a testament to our love affair with junk food you can handle behind a steering wheel. L.A. County alone has at least 680 doughnut shops, according to Yelp, about 200 more than New York City and double the number in Chicago’s Cook County.

A Cambodian doughnut shop owner asked box distributor Westco some four decades ago if there were any cheaper boxes available other than the standard white cardboard. So Westco found leftover pink cardboard stock and formed a 9-by-9-by-4-inch container with four semicircle flaps to fold together. The perfect fit for a dozen doughnuts.

More importantly to the thrifty refugees, it cost a few cents less than the standard white. That’s a big deal for shops that go through hundreds, if not thousands, of boxes a week. It didn’t hurt either that pink was a few shades short of red, a lucky color for the refugees, many of whom are ethnic Chinese. White, on the other hand, is the color of mourning. Experts also say the color triggers an emotional connection to sweetness that makes doughnuts more irresistible than they already are.

So, if you’re shooting a scene that takes place outside of Southern California, and it involves a bakery box, spend the extra 3¢ and get it right.
Posted by Matt Shevin at 12:08 AM