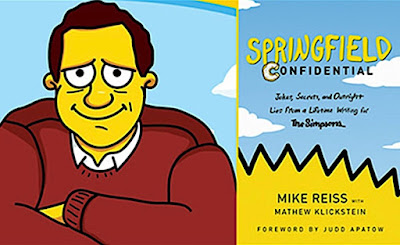 Shout-out to smartphones for eliminating tedious tasks from our lives, like reading books or watching the road when we drive.

I still read. At least on the elliptical. And I just finished Mike Reiss’ very insightful book about “The Simpsons”. Here’s a story I loved:


“Family Guy” creator Seth MacFarlane is like our Ned Flanders; no matter how much we berate him, he’s always warm and gracious. Our writing staffs have begun to blend, which led to the unthinkable becoming a reality: a “Simpsons”/“Family Guy” crossover show. I imagined our creators would oversee every aspect of the episode, but instead, amazingly, they told “Family Guy” “good luck with the crossover – we’ll watch it when it airs.”

In the end, everyone from both camps loved it… except Seth MacFarlane. The running theme of the episode was that “Family Guy” stole everything from “The Simpsons”. They made this point over and over until apparently, at some point Seth told his staff: “Guys – enough.”

Here’s a story you may know, but I heard from Seth himself. Years ago, he spent a weekend in Boston but had to catch a plane back to LA. His travel agent gave him the wrong time, and when he arrived, his plane took off without him. Seth got on the phone and was yelling at his travel agent when he looked up at an airport TV. The plane he was supposed to be on had just crashed into the World Trade Center. What’s the point of this story? That I like “Family Guy”, but God friggin’ loves “Family Guy”.