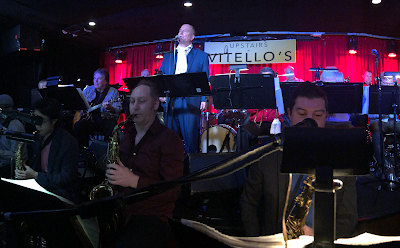 I had a neighbor who was teaching himself to play the saxophone. He was so shitty, I was always relieved to see his cat in his window – it insured he wasn’t kicking it around the living room.

I got to sit right up front for some real sax players – major pros – on Saturday, when my friend John Kapelos performed his jazz album live at Vitello’s.

John is a prolific actor, having appeared in over 200 films and TV shows (he was Mr. Arzoumanian, the owner of the cinema in The Shape of Water), but singing brought out an interesting side of him. He was so nervous when I visited him backstage before the show. I assured him he was going to kill, and that the crowd was great and the band was superb.

And what a band. 18 pieces! Four trombones! Lots of spit valves being dumped! Plus all of the saxophonists would switch up and play clarinets, flutes, and piccolos, so it was more like 32 pieces.

John sang every song from his new album “Too Hip for the Room”, and it was so fun and funny. Many of the songs evolved from his days as a member of Second City in Chicago. He closed out the show with a fitting, super jazzed-up cover of “Don’t You Forget About Me”, the theme song from The Breakfast Club, John’s first big film.

John told me afterwards he couldn’t have done without both his girlfriend Heidi and me as focal points in the audience, and it made me somewhat emotional. But I think of John as a brother and that’s what we do. We support. And I had a blast. And I can’t wait for him to do more shows.

You can download John’s Album on iTunes here. You will love it.
Posted by Matt Shevin at 12:08 AM