Hand It Back, Douchebag. 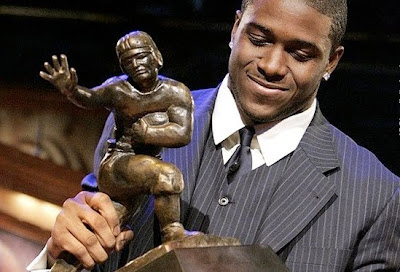 Writing about Reggie Bush, the most selfish player in all of sports, is enough to make me wanna give this blog a courtesy flush.

Thanks to Reggie accepting $300,000 in gifts while attending USC, he screwed future Trojan teams out of two years of postseason games, and a bunch of scholarships. He hasn’t owned up to it or apologized once.

Recently, my friend Marshall, a former college QB turned actor/director, was supposed to shoot something with Reggie, but Reggie was such a colossal prick that Marshall canceled the shoot.

Well, now the folks who gave Reggie the Heisman Trophy want to take it back, and here’s where I thank God that they do.

(Hold on, I’m not done thanking God yet.)