Good Guys Finish In A Playoff For First. 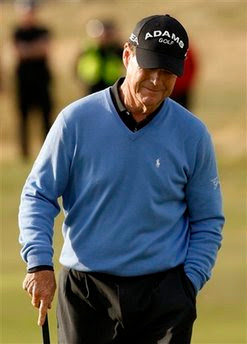 I’ve seen my fair share of mean in my life. Like the time my frat brother purposely and violently vomited on the hair of a sorority girl at a party, earning himself a fistful of singles. Ah, cherished memories.

So when I get the opportunity to instead blog about a truly good dude, I’m on it like Snoop on a fatty.

As a kid, the Westchester Golf Classic took place in my hometown, and one year during a practice round I asked Tom Watson for his autograph. He was the nicest guy – not only taking time to sign, but trying to get to know each person who approached him. He’s been my favorite golfer ever since.

Over the weekend, at age 59, Tom was in first place going into the last hole of the British Open. He had a chance to pull off one of the greatest stories in sports history, but unfortunately finished tied, then lost in a playoff round.

In the end, Tom really had the crowd on his side, and how couldn’t he? It would be like turning on Santa Claus, or happy hour.

Here’s hoping you get to win your first big one in years, sir.
Posted by Matt Shevin at 1:49 AM