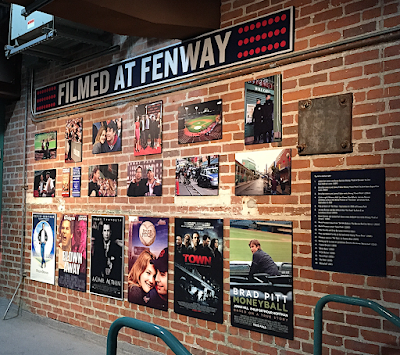 If a giant sinkhole opened up and swallowed the city of Boston, I’d think, “Poor sinkhole.”

I kid. I love Boston. But the Red Sox are the mortal enemies of my Yankees, so it’s my civic duty to make fun.

A few years ago, I went to Fenway Park to see Derek Jeter play his very last game. It was one of my favorite days ever. Fenway is a beautiful landmark loaded with history, and one feature that caught my eye was a tribute to films shot in the stadium. They include Field of Dreams, The Town, and Moneyball. That’s a monster lineup.

So there you go. A beacon of hope in an otherwise sketchy town. Again, I kid.
Posted by Matt Shevin at 12:08 AM

Bill Burr (a Bostonian) called Boston "a racist San Francisco." I thought that seemed about right.