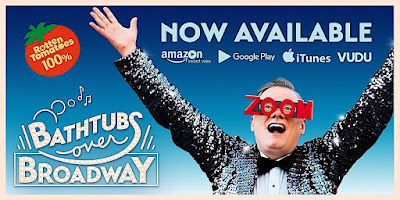 Documentaries not only expand my world views, they also compel me to change my behavior for a solid 24-36 hours.

Over the weekend, I watched a great, relatively new documentary about a surprisingly fascinating subject. Steve Young, a long-tenured writer for David Letterman, was tasked with finding albums for a recurring desk-piece called “Dave’s Record Collection.” The songs he found ranged from nutty (anything by William Shatner) to very odd: a tribute to refrigerators.

Corporate tunes like this led to Steve unearthing a hidden world of musicals performed for company events and conferences in the 1960s and 70s. Huge musicals, often featuring famous names like Tony Randall and Florence Henderson, often performed just once, and recorded on a limited number of albums.

It made sense that the shows remained hidden – they were considered the ultimate sellout for Broadway writers and performers. But such a tremendous sellout. While producers were given around $400,000 budgets to create Broadway shows back then, for corporate one-offs they were given over $3 million.

The albums flipped a switch in Steve’s brain he didn’t know he had, and he became the ultimate, obsessed collector. Bathtubs Over Broadway follows him as he meets other collectors and now much-older performers and composers. Even David Letterman makes a rare appearance to talk to Steve about it.

It’s a bygone era, and many of the performers haven’t worked in a while. Their stories are woven together with Steve’s, after David Letterman announces he is retiring and Steve’s days are numbered. It’s fascinating, with a happy, emotional ending.

It’s on all the big services, like Netflix and Amazon Prime. Definitely see it. I’m dying to discuss this with someone.
Posted by Matt Shevin at 12:08 AM