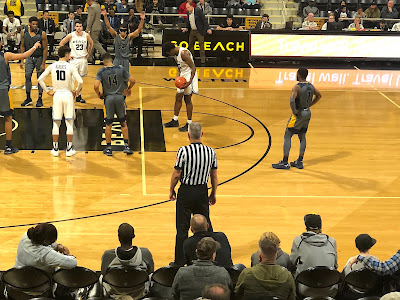 You may not know the name Bill Vinovich, but you definitely know his work, ever since he pulled a Kim Kardashian. (Screwed 53 athletes guys at the same time.)

He was the head referee during the NFC Championship game two weeks ago, in which a missed pass interference call kept the Saints from going to the Super Bowl. New Orleans had a justified meltdown.

When he’s not botching big football games, Bill is a college basketball ref, and Saturday night he worked the Cal State Long Beach/UC Irvine game, which I attended with my friend Rob. We razzed him whenever possible. (Though Bill did maintain control of this game, including at one point, in which a young lady mopping up sweat by the basket didn’t realize play had resumed. Bill quickly and gently escorted her off the court.) 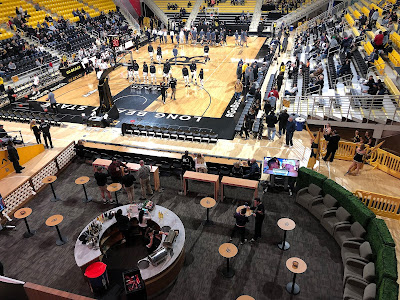 By the way, I highly recommend checking out a Long Beach game. They have a great band and a cool DJ during timeouts, play in a nifty pyramid-shaped arena and have the world’s only bar alongside a hoop – the Courtside SandBar. Best cheap ticket in town.
Posted by Matt Shevin at 12:08 AM