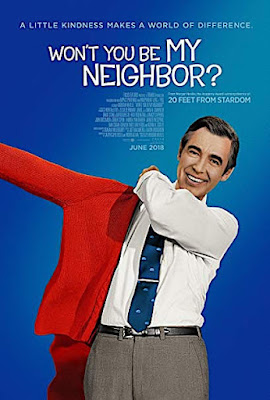 I once watched a documentary about a guy who pushed himself 3,100 miles across the United States in a wheelchair because my remote was on the other end of the couch.

Engrossing. Speaking of which, over the weekend, HBO debuted the Mr. Rogers documentary Won’t You Be My Neighbor, and I loved it. It made me want to list a few more you should really check out. Stick to my list, because trust me when I say: Netflix never lets you forget you watched a sex documentary.

“American Masters” Johnny Carson: King of Late Night. Most interesting: Johnny never was able to please his mother, who was quoted in a Time magazine cover article after the first day Johnny hosted “The Tonight Show”, saying, “He’s no Paar.”

Searching For Sugar Man. Rodriguez was the best rock star who never was. He struggled in the 70s in Detroit, but suddenly blew up in South Africa. Then he disappeared, said to have killed himself onstage. Or did he? This doc won an Oscar. The music is really good, too.

Being Elmo: A Puppeteer’s Journey. This has unfortunately been tarnished after the fact with Kevin Clash’s abuse allegations and resignation from “Sesame Street”. But watching Clash realize his boyhood dream is entirely gratifying, and there’s one one deeply affecting scene, in which Clash introduces Elmo to an ailing child at a Make-A-Wish meeting.

112 Weddings. To supplement his income, Brooklyn director Doug Block became a wedding videographer. After his 111th wedding, he had a brilliant idea for a documentary: find out if many of the marriages worked out. Let’s just say only a handful of couples agreed to talk to Block (including one couple who had their wedding at my parents’ country club). Nothing is as fascinating as cutting directly from the happiest day of someone’s life to modern-day reality.

Sour Grapes. I watched this recently on my flight to DC. It’s a thriller/mystery about a trust-fund kid named Rudy Kurniawan who threw exorbitant money around at wine auctions until he became suspected of creating and selling counterfeit wines.
Posted by Matt Shevin at 12:08 AM