He’ll Be Very Much Missed. 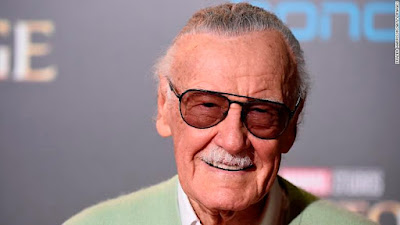 I can’t take the credit; at least a little has to go to Stan Lee. Stan unfortunately passed away yesterday, and it’s a bigger bummer than usual. You see, there are celebrities, and then there are the larger-than-life, universally-beloved celebrities. Stan’s cameos always evoked an audible response in theaters, and it was nice. I saw him walking in Beverly Hills last year and almost had to change my pants.

Betty White, Vin Scully, Stan Lee. Some of it is simple longevity (they’re all in their 90s, but maybe the longevity comes from living well and commanding respect. Stan seemed like a gentle man, who was truly enjoying his success. Always respectable: he was married for 70 years before his wife passed last year.

My friend Rob, a columnist/novelist, summed it up well:

Lee and his creations probably had more impact on more people, for better or worse, than pretty much any artist--in any field--of the 20th Century. Probably missing someone in there but you get the idea. https://t.co/FWE9RACk82
— Robert Weintraub (@robwein) November 12, 2018