Improvising With My Idol. 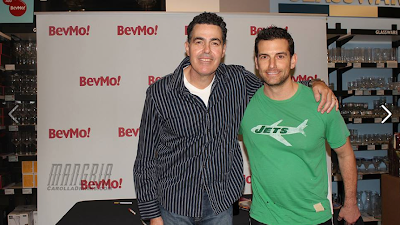 Thanks for inviting me to a wine tasting, but I’m gonna go to a wine drinking instead.

And when I do, I’ll be guzzling Mangria, the signature beverage created by one of my heroes: Adam Carolla. I pattern my life after Adam’s daily podcast, in which he riffs for 90 minutes about his world and the dysfunctional people in it. (Including his two useless, shitbag parents.) No one can touch Adam’s improv skills – he’s the greatest who ever lived.

So when I realized he was going to be signing bottles of his crazy concoction at a liquor store on my way home from the gym on Saturday (hence my super casual getup), I had to stop in and say hello to my icon.

There’s a prevailing notion that you should never meet your heroes, because they often disappoint, but Adam was definitely not that guy. He was super nice, and when I mentioned to him that I was an improv guy myself, he squared off and challenged me: 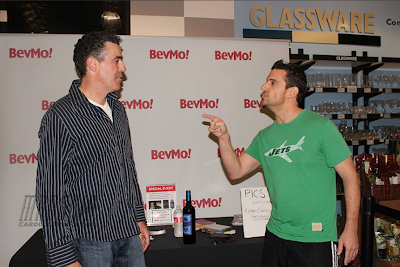 This is us in the middle of it. I’m trying to hold my own with a legend. It felt like attempting to get a piece of a Mariano Rivera cutter.

Everybody: screw the chickenshit sentiment and go meet your heroes. They might just amaze you.
Posted by Matt Shevin at 12:34 AM