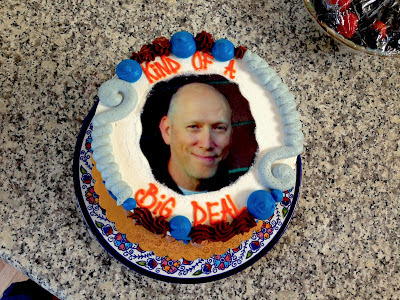 My friend Jeff got a big promotion, and we celebrated by eating his face… It’s a very good, action-packed movie, but I assumed Star Trek Into Darkness would be about the Enterprise crew’s search for the colon missing from the title…I donated money on Kickstarter to Zach Braff’s film, so I’ll be receiving emails and video updates from him as he begins pre-production. By the way, his goal was to raise $2 million to help make the film – he earned $3.1 million… Robbie Rogers made his debut with the L.A. Galaxy as the first openly gay male playing a U.S. major pro sport, and I must say I have a major problem with this – not with Robbie being gay, but with soccer being referred to as a “major” sport.
Posted by Matt Shevin at 12:01 AM

As my friend Dave said, "that is one ugly cake."