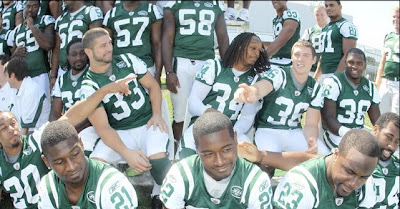 I’m not sure why, but I had a real kick in my step over the weekend. Maybe it’s because football was back. Or maybe it was the happy mistake I made of buying the new three-ply toilet paper. That third ply will change your life.

Let’s go with the former for now. Football is here, and my Jets have a big game tonight. The Jets were the team featured on HBO’s “Hard Knocks” this summer, and it was a fascinating look inside their training camp.

Super-charismatic head coach Rex Ryan wants a Jets championship more than anything, and will curse up a storm to get one. For instance, he often uses an old football term “slapdick” to describe a player that goofs off. I’ve been calling Petey that full-time now.

I was talking to a friend of mine about the show, and we couldn’t understand why some of the players, who were on the bubble of making the roster, wouldn’t use any means necessary to avoid getting cut. Hurl your body at guys. Take chances. Play like a maniac.

But some of them just wouldn’t. Like Larry Taylor, a very undersized receiver who had a chance to make it via special teams. Larry took a knee in the end zone rather than return a big preseason kickoff, and lost his chance. Meanwhile, Jason Davis, a long shot to make it as a fullback, grew so frustrated with his lack of carries in practice that when finally given the chance, he refused.

I see this behavior among fellow actors, and have an almost daily conversation with one who is thinking about quitting. I’ll never, ever quit myself, but it does beg the ultimate question: when do you quit on your dream?

I’ve given it a lot of thought and come up with a very simple answer: if you’re able to just walk away, then it’s time. No guilt means the business just isn’t for you. But if you want it bad enough, yes, the odds are horrendous, but you persist because this is what you do, and you love it too damn much.