In Which I Try Not To Sprain My Tongue Pronouncing Last Names. 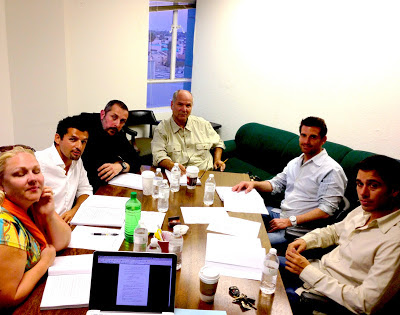 When it comes to revenge, the Bible says it’s wrong. Then again, it’s the surprise hit of the season on ABC, so I don’t know.

And if you mess with the Greeks, they will hand you your ass. My friend John Kapelos asked me to join him and a stellar cast of Greek actors for a table read last week for a film called The Greek Battalion. (Eva Tingley and I were the token non-Greek actors. New goal: become the Greek James Caan.)

John, pictured to my right, just finished a great TV season, playing Stavros the florist on “Modern Family” and Picker on “Justified.” You can view his updated acting reels here.

The Greek Battalion script is a true story, adapted from a book written by a WWII hero named John Giannaris, who led a troop of undermanned Greek Americans commissioned by FDR to kick the Germans out of Greece. The read went really well, and we may run through it again as we’re building up to a big stage reading on the 25th at the Huffington Center for a large group of Greek business types who might finance the film. My motivation: sell this thing and celebrate by smashing a shitload of plates.
Posted by Matt Shevin at 12:05 AM

I recently finished working on a similar project, a short movie called "Athanasios" about a Greek survivor during that same Nazi occupation! I play a not-so-fortunate Greek villager who's goose gets cooked. The director is entering it into this year's Gabby Awards. I was just wondering if your project was heading in that direction as well.

Not so sure. Big budget is first and foremost right now.